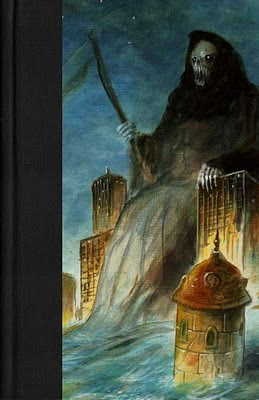 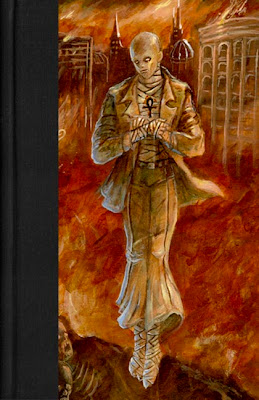 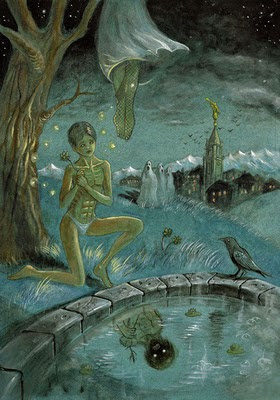 My friend Joe, a brilliant sculptor, made the wonderful work below, whut he calls "Queen in Yellow." I'm so mesmerized by it because when he sent it to me I was working on a rewrite of a Lovecraftian story in which a new character is a madwoman in a graveyard who wears an attachment of wings on her back, & to have this artistic rendering of my character was just too strange and wondrous. But the story isn't working out -- indeed, I've come to loathe it -- so I am going to write a prose poem featuring this figure. My own character did not hold a wee scythe as Joe's figure does, and that really got my imagination going. I had a scene, in my rewrite (whut I have now discarded), where my main character told her how beautiful she is. Her reply is to take the blade of her scythe and rip it into her face, and then tell him, "Beauty is so easily blemished."

The painting to ye left, of ye sad creature peering into ye pool, is the one original work of art that will appear in The Tangled Muse, illustrating my story, "Inhabitants of Wraithwood," whut had its first publication in S. T. Joshi's Black Wings. I love this eerie illustration, & it so amus'd me that he put in ye Mormon Temple with its golden Angel Moroni amongst ye inhabitants! The gent who did the "Wraithwood" painting is a Swiss lad named Gwabryel, and he has done other work for Centipede Press, such as that above for the Poe and F. B. Long editions of Masters of the Weird Tale.

Here at my Mother's house we have a rather splendid view of three spots wherein the townsfolk shot off their mammoth fireworks displays for ye 4th. It was strange tonight, for I am non-patriotic and anti-social, but as I watched the fireworks displays from our huge front window and listened to the gather'd neighbors at ye intersection where the local kids were lighting their various gizmos, I felt a curious desire to linger amongst ye People. I lasted fifteen minutes before I grew cold & restless. Five minutes after I returned home, a huge downpour of rain fell from heaven and dispurs'd ye crowd. It felt good to try and be neighborly, which is not a talent in which I excel. I am what Lovecraft is so often accused of being: a eccentric recluse. But this is actually a great neighborhood. Indeed, our zip code, 98118, is the most culturally diverse zip code in all of America, according to ye new census. I like the neighborhood because it is usually extremely quiet -- so important for we who write.

Yesterday's post brought The Conspiracy Against the Human Race, by ye brilliant Thomas Ligotti. Its philosophy is that it would be preferable not to exist than to be human and live in this awful world. I am on page 69. The book is not depressing to me because I care so little about humanity -- which makes me a complete failure as a Christian, lacking charity as I do. I don't know if my attitude is typical of the artist -- I want to be left alone; my best friends are my books. I can enjoy human society sometimes, especially gatherings of poets or Lovecraftians, and there are individuals whom I dearly love and long to hang-out with, although being with them makes me aware of my human faults and frailties. Tom's book posits the question, if you had to choose to exist or not exist -- whut wou'd be your choice? My immediate inward reply was, "I wou'd choose to exist, because of the experience of Shakespeare." The idea that I may never have experienced the emotional and intellectual nourishment of Shakespeare fills me with utter dread. (Yet I must confess this is mostly from reading Shakespeare and listening to the plays beautifully perform'd by British players; I have sat through productions of the plays that were utter torment and made me ache for death.) My life has been an experience of joys and sorrows, wonders and tragedy. The life I am living now is almost continuously miserable. I often sit here at my writing table with my head in my hands muttering, "I can't take this any longer." I am not afraid of death because I know it is not an end of existence -- we have neither beginning nor end. But what keeps me wanting to stay alive with an intense desire is greed for Literature (always with a capital L), the need to read and read and read. Some may call it an "an escape from reality" to dwell almoft constantly in this basement, alone with my books. The idea of an escape from reality is too bogus and absurd, and only ignorant morons mouth such an idea. So, yes, I absolutely choose to stay alive, so as to read and ponder -- and sometimes to write. That is the meaning of my little life.
Email Post