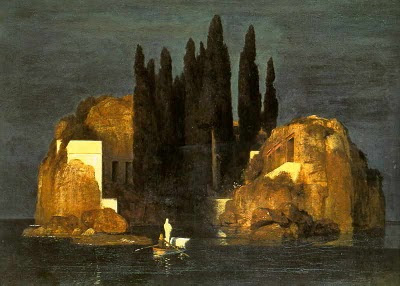 It's curious and wonderful when life and art conjoin, mysteriously, fantastically. Some time ago, influenc'd by a temporary genre that was called "The New Weird," I decided to try and invent a new locality in which to set some newer tales, an urban setting. I envision'd creating some fabulous city (China Mieville was probably the major source of inspiration & desire in this), sophisticated, modern, cutting edge. I don't know what inspir'd my idea that this would be a city of exiles, as I don't remember what came first, the idea for such a city or my main character in it, based on Oscar Wilde and named "Sebastian Melmoth," which was the name that Wilde took when he went into exile in France. The idea seemed rich and full of possibilities -- endlessly so. I would write in this new series tales that were not Lovecraftian.

Ha! The first tale of Gershom, "Some Buried Memory," is Lovecraftian up ye arse, a tale of ghouls connected (subtly, one hopes) to "Pickman's Model." It was rejected by Weird Tales and will see its first publication in my Centipede Press omnibus, The Tangled Muse. I have this sinking feeling that it's not a very good story, but I like it nonetheless. In this tale, I describe an island, not far from the city, that serves as burial ground, to which one gets by way of raft. Well, the other day I was looking at Symbolist art online, and I came across the bottom image -- which instantly took my breath away. "That's it," I cried to empty air. "That's my isle of Death!" You can imagine my wonder when I discover'd that ye title of the piece is "Isle of the Dead," by Swiss Symbolist artist Arnold Bocklin (1827-1901). This was one of those wonderful moments when I found in art a product of my own imagination. I love such magical moments.

The second tale of Gershom is "The Tangled Muse," and I feel it is one of my best stories. And yet -- how perverse is my approach to inventing a "modern" city to serve as locality for a new series of Urban weird fiction. My Gershom is nothing more than a combination of that which I adore in Literature. It is a combination of Wilde's London and Baudelaire's Paris, with a wee bit of Kafka's Prague on the side. It is antient & haunted & ethereal. It is the opposite of modern in every way. I am now writing my third tale of Gershom, "Let Us Wash This Thing," and I am aiming for something profoundly decadent. We shall see if I succeed.

I've been suffering through a couple of months of mental and artistic chaos and stupidity. Everything I have try'd to do has been the wrong thing, and almost everything I have written these past two months has been deleted -- they were failures in almost every way. It's so boring. I want to write, and I want that happiness that comes when you've penned something that seems worthwhile. Writing, at times, feels like a form of self-creation -- we build our psyches, our souls, our personae, as we pen our poetry and prose. The spiritual limbs that I have try'd to create these past many weeks have been stunted, lifeless things. I'm hoping the things I am now trying to evoke will be a bit more successful. I've also started a wee prose poem sequence, "These Deities of Rarest Air," with which I am semi-pleased. It all goes so slowly, and I want this new book for Hippocampus all completely written by this year -- whut nigh seems an impossible task. Still, the struggle is worthwhile, because I love this life of Literature.
Email Post