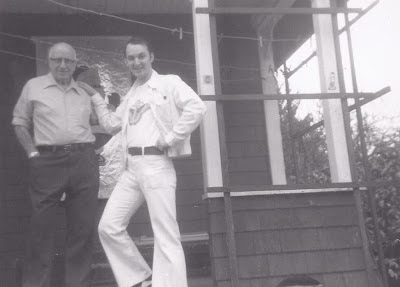 That's me on the porch of H. Warner Munn's house, the house he built when he moved from New England to Tacoma, Washington.  I had just come out and that was my first attempt to "dress gay," but I don't think I ever came out to Harold.  I had just had a wee love affair with Jessica Salmonson at the time,  and she began to accompany me on my week-end visits to Harold, and he assumed she and I were lovers.  I had read in some small press horror magazine that Harold lived in Tacoma.  He had been a chum of H. P. Lovecraft's when he lived in New England, and Lovecraft delighted in the trips in Harold's car when they drove around hunting for antiquarian New England haunts.  I had just become an obsessed Lovecraft fanboy, so actually meeting one of Lovecraft's pals was intensely exciting! 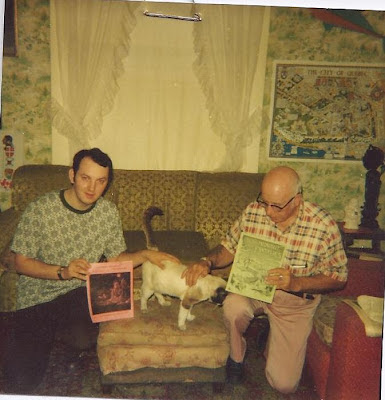 There we are in his living room, holding copies of the Lovecraft fanzine that I published in the 1970s.  I used to sleep overnight in Harold's attic room, where he kept his library and had his working area where he wrote new things.  It was up in that attic that he kept his old Arkham House books, his copy of W. Paul Cook's The Recluse in which both he and HPL had some writing, &c.  It was utterly magickal.  Harold became a real father figure to me, and was one of the sweetest men I have ever known.  I was so proud when he dedicated one of his final chapbooks, The Affair of the Cuckolded Warlock, to me. 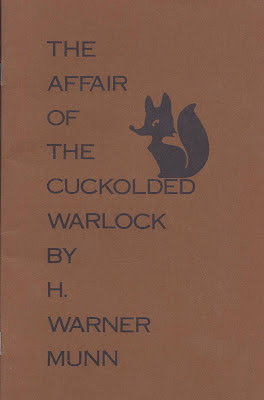 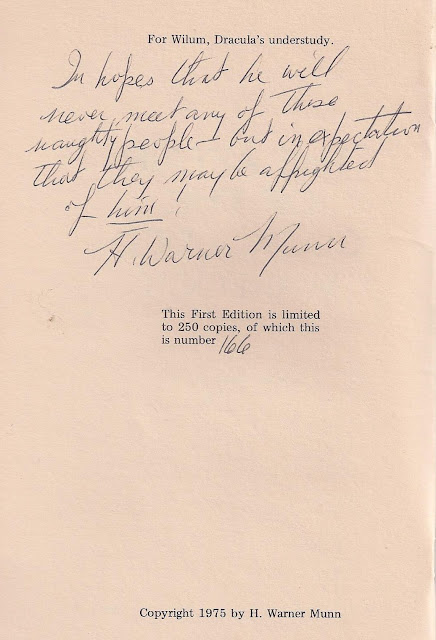 I've written some few weird tales in his memory, the best of which is in The Tangled Muse and entitled "And Drink the Moon."

Speaking of my Centipede Press omnibus, I've just noticed that most of ye numerous copies available at Amazon have sold!  My thanks to everyone who purchas'd that very expensive book.  All of the new original works that I wrote for it have now been reprinted in my new trade paperback from Hippocampus Press: 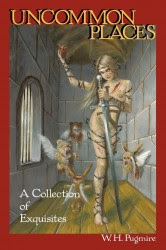 I feel that I have been extremely fortunate to have been born at a time when I got to know members of the Lovecraft Circle in their elder years.  J. Vernon Shea became one of my best friends, and Robert Bloch was the man who really inspired me to try writing weird fiction.  Bloch wrote some things for my horror film fanzines in the late 1960s and early 1970s, and then we continued to correspond when I was sent to Ireland to serve my two years as Mormon missionary.  The LDS leaders frowned on my going to horror films (I was obsessed with horror films and had plans to become a horror film actor as a career), and so instead of going to films I began to buy horror anthologies in which Bloch was one of many writers, and that was how I got hooked on horror fiction.  By the time I left to return to the States I had so many horror paperbacks that I had to buy a wee suitcase to carry them all in.  While I was preaching in Omagh, Northern Ireland, I bought my first Lovecraft book: 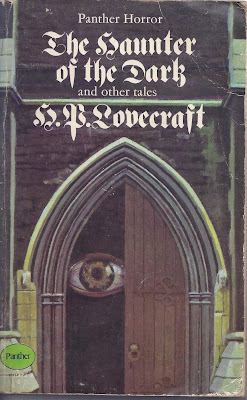 & I was amazed to see that the book's title story had been dedicated by Lovecraft to by chum, Robert Bloch!  It now feels like destiny, so many threads of fate weaving together so as to produce my eventual future as a weird tale artist obsessed with writing tales of Lovecraftian horror.  Sure has been a great life!

Hope y'all who buy the new book enjoy it.  I think it is my second-best book, following Some Unknown Gulf of Night.  My next book, The Strange Dark One--Tales of Nyarlathotep, will be publish'd later this year by Miskatonic River Press.  I've suggested to Tom Lynch that ye book be publish'd in October, I love having books released in October.  The book I have written with Jeffrey Thomas, Encounters with Enoch Coffin, was due out late this year, but I have asked that it be publish'd early next year, so that I can have a book dated 2013.  The first edition will be published as hardcover by Dark Regions Press, completely illustrated.  It is all original work, no reprints, and Jeff has penned some of his finest Lovecraftian weird fiction for the book.  I am particularly pleased with my new novelette set in Kingsport.  The Enoch Coffin book, indeed, may be ye most Lovecraftian book that I have ever worked on.  It is Lovecraftian to ye core.

Hope y'all be having a great week-end.  Season finale of The Walking Dead tonight is gonna be intense.  Shalom, my darlings.  Pleasant nightmares (as Bho Blok wou'd say!).
Email Post 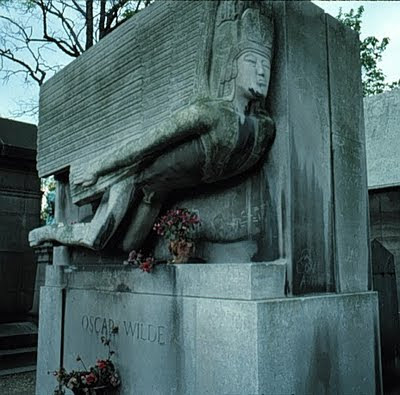