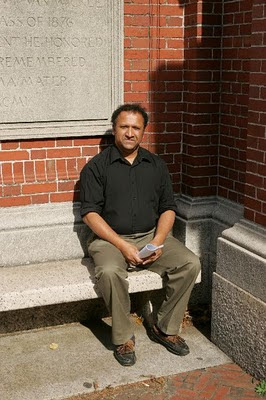 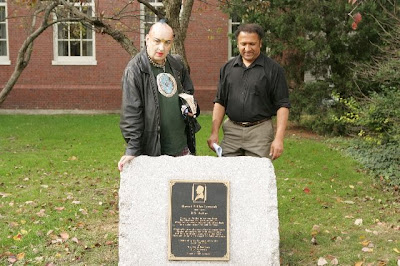 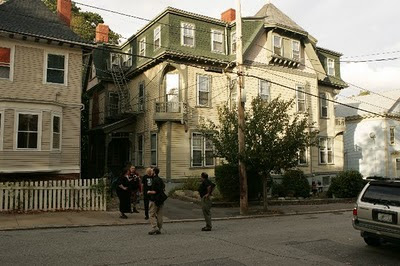 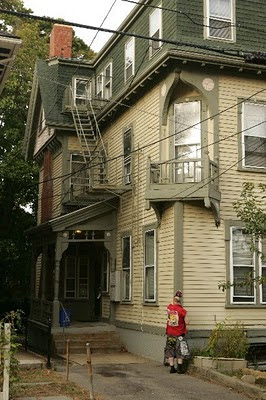 This was the happiest day of my life, one that can never be equal'd. It was on this day, this hour, around 4.30 p.m. on 23 Octobye 1707, that I stood in front of 10 Barnes Street with Maryanne and Greg and S. T. Joshi, and then I went up and touch'd ye sacred abode. Greg and Maryanne had taken me to New England and New York for three weeks, and we spent four days in Providence, in a bed & breakfast directly across the street from the Shunned House! We had no idea that for two of our days, S. T. Joshi would be in town doing work on the Clark Ashton Smith papers at John Hay Library -- this is the magic of Providence. S. T. took us on an exhausting walking tour of Lovecraftian sites, but it was standing here, in front of the house where HPL wrote so many of his classics stories, the Fungi from Yuggoth sonnet cycle, &c &c, where I felt Lovecraft's spirit the strongest. It was an amazing experience. During this wee tour I was carrying all three of S. T.'s Penguin Classics editions of Lovecraft's fiction, plus my wee Ballentine Books mass pb edition of Fungi from Yuggoth & Other Poems, a reprinting of the Arkham House edition of Lovecraft's poems complete with those wondrous Frank Utpatel illustrations (one of which we will be reprinting in The Tangled Muse). I don't know if other Lovecraftians visiting Providence seek to feel "the spirit" of H. P. Lovecraft, some lingering something that hints of a particle of his essence still lingering there. I certainly did nit sense it at Swan Point -- but I felt it here moft potently, along with my deep gratitude to my beloved Greg and Maryanne for their gift of letting me dwell in Providence, and the awesome gift of S. T. Joshi's friendship and all that he has done for Lovecraft's texts. Standing before this house just did it for me, it made me
feel that I was a Lovecraftian to the core of my soul, and I made my wee vow that, as an author, I wou'd work my guts out to write book after book of Lovecraftian fiction until my happy day o' Death. This was the moment, standing with those magnificent friends before that historic house, when I felt every inch a Lovecraftian, and gawd what a great feeling it is! I became a Lovecraft fan in 1973 (the same year, I think, that S. T. got hooked on HPL), and those early years were intense. Members of the Lovecraft Circle were still living, and I began to correspond with many. I was writing my first weird tales, most of which were happily been destroyed before they saw print. I learned, through either Whispers or Weirdbook, that H. Warner Munn was living in Tacoma. As a man in his early twenties, Harold Munn was selling stories to Weird Tales and driving H. P. Lovecraft around sightseeing in New England. I drove to Tacoma, got into a phone booth and called up Harold, and thus began a firm friendship that lasted until his death. He read to me the stories that he had penned for the Unique Magazine, shew'd me his copy of The Recluse, took me to gatherings of poets. Told me tale after tale of being with HPL. It was a great time to be a Lovecraftian, because the new era of serious Lovecraft scholarship was just beginning. However, great as that time was, nothing compares with NOW. Great Yuggoth, what a great time this is to be a Lovecraftian. Book after wondrous book is being publish'd, collections of Lovecraft's correspondence, his collected essays in five volumes. Soon we will have S. T.'s definitive biography of Lovecraft in two hardcover volumes, and a new hardcover annotated edition of my favorite Lovecraft work, The Case of Charles Dexter Ward -- which he wrote in that magical dwelling before which I once stood, #10 Barnes Street. Lovecraft has given me so much joy, & he is the gift that will keep on giving, for the rest of my life. He has given me my writing career, the best of my friends, my most exquisite joys.
Email Post