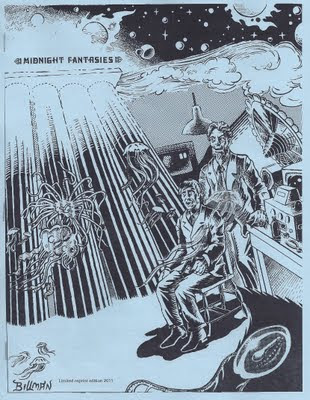 One old pal that I have long hoped to reconnect with is Dave Billman, who began to illustrate my fanzines back when I was in high school.  I finally found him again at Facebook.  It was Dave who gave me the name of "Wilum," telling me he thought it sounded like the name of some backwoods Dunwich denizen; & it was from Dave that I got the dream-name of Mount Selta in my Sesqua tales -- Khroyd'hon -- as at the time Dave lived on Croydon Street.  The cover above is from my Lovecraft fanzine from the 1970's.  I have long wanted Dave to illustrate one of my books, and he has recently express'd interest in doing so when I pitched ye idea to him; so one future book idea is going to be a collection called Visions of Khroyd'hon, Sesqua Valley tales and novelettes illustrated by David Billman.

Life has been rather chaotic of late, which is okay except that I haven't been able to concentrate on new writing.  I've spent this morning reading a book I just got in ye post, Contested Will, by James Shapiro; & I've been rereading the superb Jonathan Bate book, Soul of an Age.  Reading about Shakespeare always instills within me an ache to work on a new sonnet sequence.  Thus I got out an excellent book, The Making of a Sonnet, edited by Edward Hirsch and Eavan Boland (W. W. Norton and Company, 2008), and am nigh preparing to begin slow and steady work on a new sonnet sequence that I want to call Sonnets of Loneliness and Light.

It was simply amazing to be able to watch a DVD of the new film from The H. P., Lovecraft Historical Society, their amazing production of The Whisperer in Darkness.  It is, quite simply, the finest film based on a Lovecraft story ever produced, a work of talent and genius.  I may never be able to view the film on a big screen, as I am house-bound as my mother's live-in caregiver and cannot leave her alone; but I am anxious to own the DVD myself and thus watch the film with my headphones on so as to drink the stereophonic score to ye full.  If you have a chance to view this magnificent film, do not fail to do so.
Email Post