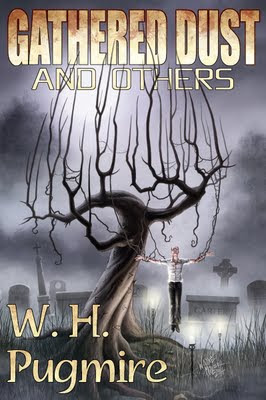 Gathered Dust and Others will have a hardcover edition limited to 100 copies, as well as the special boxed leather-bound Deluxe 13 edition limited to thirteen copies.  The book will be officially announced by Dark Regions Press tomorrow--Tuesday, 7 June 2011--and Joe will probably then begin to take pre-orders.  I don't expect this hardcover edition to sell out in pre-order as Some Unknown Gulf of Night did, but who knows?  I am extremely happy and grateful to have a third hardcover edition of my fiction offered this year!  There are those who dislike trade paperbacks and prefer to collect an author in hardcover, and small press limited edition hardcovers are often such lovely books, beautifully produced.  Most of the reprints in this book have not been available in hardcover.  Of the new works, the title story is a new Lovecraftian novelette set in Arkham and serves as sequel to J. Vernon Shea's "The Haunter of the Graveyard," a tale that Vernon wrote for Augie when Derleth was editing ye original Arkham House edition of Tales of the Cthulhu Mythos.  Another long new story, "Depths of Dreams and Madness," is set in Sesqua Valley in the 1920's and has, among its characters, H. P. Lovecraft's sinister artist, Richard Upton Pickman and Robert E. Howard's mad poet, Justin Geoffrey.  The book features one of my weirdest, most perverse vignettes, "Let Us Wash this Thing," and a new Lovecraftian prose-poem sequence, "These Deities of Rarest Air."

Gawd, how I love Wayne Miller's superb jacket painting, above, and the lettering which is tainted by graveyatd debris!  Jeffrey Thomas served as the book's editor and has supply'd a rather remarkable Introduction.

Click on ye title of this blog to be taken to the Dark Regions Press website, where the book will be announced in their newest newletter and probably be availablefor pre-order.  We expect a late-Summer release for the hardcover.  After all hardcover editions havesold out the book will be available as trade paperback and ebook.