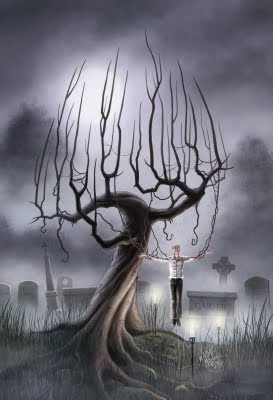 I have been exceptionally lucky with my illustrator's for my books.  My first book for Dark Regions Press will be Gathered Dust and Others, and the remarkable Wayne Miller just completed his stunning jacket painting for the book.  The scene depicted is from the collection's title story, a new tale set in Arkham that is a sequel to J. Vernon Shea's "The Haunter of the Graveyard," a story that Vernon wrote for Derleth when Augie requested a tale from Vernon for the original edition of Tales of the Cthulhu Mythos.  I have always loved Vernon's tale and wanted to write some kind of sequel to it as a memorial to our friendship -- of all of the members of the Lovecraft Circle who knew and corresponded with HPL, Vernon was my dearest friend.

Here's are a couple of relevant portions of my story that explain the scene in the painting above:


# # # # # # # # #
I found, during my first two months of residence in Arkham, that Uncle Silas had gained a curious reputation in the town, for it was whispered that he never ate, was never known to shop for groceries or dine out; and the fact that he was often seen haunting the abandoned cemetery at night gave way to gossip of vampirism and other such nonsense.  It was when I discovered my relation's own home movies that I learned how uncanny truth can eclipse the wildness of paltry rumor, for Uncle Silas had followed Elmer Harrod in the practice of being filmed within the wild confines of the haunted burying ground; but where the horror host had brought in a film crew to record his outlandish behavior among the tombs, it seemed that my uncle's was a one-madman's crude operation.  On one spool of film he had recorded himself dancing among the rotting stone slabs and speaking the most outlandish gibberish I have ever heard, in what must have been a language of his own invention.  He seemed almost to chew his lips as he drooled and muttered a name I could not make out.  I found a film that showed him reclined on the slab beneath which Obediah Carter slept, and the dim electric light that he had somehow been able to set up caught to perfection the weirdness of his facial distortions, with which he mimicked the actual visage of the dead sorcerer.  The most disturbing images that I found, however, were caught on the three spools that showed my old relation twitching before the unwholesome tree on which he had ended his life.  On one spool of celluloid he is shown wrapping the tree's pale vines around his arms and ankles and then pirouetting like some deranged puppet; and it was disturbing to see how the old withered tree, in the uncanny light, took on the semblance of a gigantic bestial claw that curled its grotesque distended digits in night air.
# # # # # #
My uncle's experiments with filming seemed to incorporate some kind of trick photography near the end, for on the last spool of film he is shown in close up, dangling from the vines of the tree, vines that resembled cloudy veins through which a dark substance flowed in the direction of my uncle's upraised arms, into which the vines had penetrated.  Uncle Silas did not regard the camera as he muttered, "More, more--my arms are hungry."
# # # # # # #
I wrote the initial version of this story as segments in the addition to my prose-poem/vignette sequence, "Uncommon Places," the additional 10,000 words of which will be published next year in my second book from Hippocampus Press, Uncommon Places.  The sequence is a series of segments that are all inspir'd by entries in H. P. Lovecraft's Commonplace Book, and the entry that ispir'd the above scenes in my tale is Entry #112:  "Man lives near graveyard--how does he live?  Eats no food."
I really look forward to the publication of this first collection from Dark Regions Press.  It will be my first ebook, and there will be a trade pb edition.  There will also be an edition in DRP's Deluxe 13 series, limited to thirteen copies in hardcover and slipcase.
Email Post