THE STRANGE DARK ONE DELAY'D 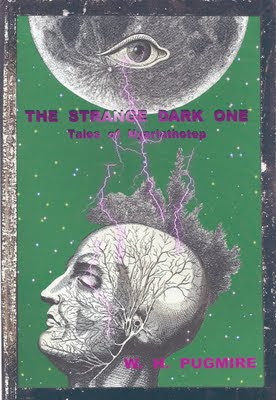 Above is ye original Jeffrey Thomas cover for THE STRANGE DARK ONE.  We've added some additional drag to the cover and 'tis much more colourful nigh.  The book was scheduled to be publish'd next month, my one paperback book in a year of three hardcover books.  Just had a wee chat with Tom Lynch, and he wants to bring the book out early next year--which is quite fine, really, as three new books a year is fine.  Of course, this means that I will have FIVE BOOKS out next year--oy; three new titles and two reprints.  So, GATHERED DUST AND OTHERS will be publish'd in hardcover this year, perhaps this month.  Then next year's publications will go something like this:

I have yet to begin work on MIDNIGHT DIN AND OTHER WEIRD STORIES, my second book for Arcane Wisdom Press.  Ain't in that zone yet that makes writing possible; but I don't want the book publish'd until 2013 (five books out next year is mo' than enuf, methinks), so there's no rush in writing it.  I will delay the writing of my second book for Miskatonic River Press, MONSTROUS AFTERMATH, by one year.  I think next year's big new project will be the writing of a large collection of tales set in my city of exiles, Gershom, a book I plan on writing with Maryanne K. Snyder, and probably call DWELLERS IN EXILE.  Lots of lots of writing yet to do.  Perhaps after a few years I will finally find the courage to try and write the collection of poetry and poems inspir'd by ye works of Clark Ashton Smith, an idea that haunts and won't let go.