Hanging Out with Grandpa 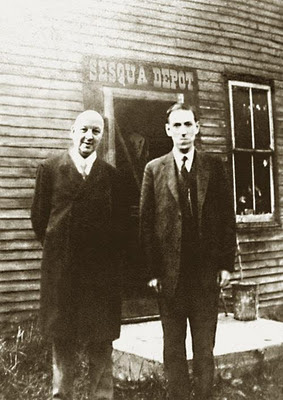 This is me and HPL at ye Sesqua Depot around 1933.  I have a vague recollection of the day.  My friend, Andrea, took the photograph with the camera that was left behind by Richard Upton Pickman, who vanished in Sesqua Valley after a visit with Simon Gregory Williams (you can read about that in my story, "Depths of Dreamks and Madness," to be published next month in my new book from Dark Regions Press, Gathered Dust and Others).

Jeffrey Thomas has been working his ass off editing and proofing our book, Encounters with Enoch Coffin, whut will be publish'd next year by Dark Regions Press.  I have to say that I am extremely excited about this book!  Last year at this time I entered a state of intense creativity, utterly hypnotized by my Ever-Muse, H. P. Lovecraft, and wrote Some Unknown Gulf of Night in six weeks.  (The book just came out in paperback and there are so copies for sale at Amazon.com.)  It happened again this year, as I was writing my stories for the Enoch Coffin book -- I became utterly beguiled by our character, Enoch, and his exploits.  Jeff kept sending me his tales for the book, and they are amazing!  I love our book because it is so audaciously Lovecraftian.  Writing it with Jeff has been one of the best experiences in my life.  I think the story I wrote, set in Kingsport, may be my very finest piece of fiction.  Ye Contents of the book is:

Jeff focused on writing stories set in real New England, while I set my tales in Lovecraft Country.  I did, however, write one tale set in Providence, and then I decided to pen one final tale of Enoch Coffin visiting Sesqua Valley.  The book will have a jacket by the magnificent SANTIAGO CARUSO!!

There are a number of anthologies still to come out this year in which I have tales.  Let's see if I can remember all of them:
NEW CTHULHU: TALES OF THE RECENT WEIRD
THE DEVIL'S COATTAILS
HORROR FOR THE HOLIDAYS
MONSTERS AND MORMONS

Hmm, I may be forgetting one other.  NEW CTHULHU will be reprinting "The Fungal Stain," and the book's contents looks just wonderful, I'm very excited about that book.  Maryanne K. Snyder and I wrote a story for THE DEVIL'S COATTAILS in which newly-born Simon Gregory Williams of Sesqua Valley journeys to London in 1879 and taunts Oscar Wilde.  My story for HORROR FOR THE HOLIDAYS, "The Tomb of Oscar Wilde," is a tale of Rosh Chodesh.  And MONSTERS AND MORMONS will reprint "Recompense of Sorrow" for its first American publication, and I have tweaked ye tale a bit for this new publication.  Oh, I've just completed a new piece for the December issue of the Lovecraft eZine, a wee poetic trilogy for ye Holy Days called "Elder Instincts."

I think I am, at last, in the mood to write.  To begin work on the next book, a book of very queer Sesqua Valley tales to be publish'd by Arcane Wisdom Press.  I like writing for Larry Roberts.  I mean, he brought Gulf out so quickly in that gorgeous hardcover edition, and now the trade pb edition is out.  I order'd a copy of ye pb from Amazon cos they got copies before Larry did.  All of the copies that Amazon had sold out (there were probably only five), but some individual sellers are selling it there as well.  Prices at Amazon can be so fucked-up.  One guy was selling this just-published paperback for $104!!!  He has since lower'd ye price to a mere $59.  And someone is selling a used copy for $41.33 -- but I wonder if that is a used paperback edition or of ye hardcover?  Hmmm.