"We work in the dark - we do what we can - we give what we have.  Our doubt is our passion, and our passion is our task.  The rest is the madness of art."
--Henry James, The Middle Years

"When a writer succeeds in translating these nebulous urges into symbols which in some way satisfy the imagination--symbols which adroitly suggest actual glimpses into forbidden dimensions, actual happenings following the myth-patterns of human fancy, actual voyages of thought or body into the nameless deeps of tantalising space and actual evasions, frustrations, or violations of the commonly accepted laws of the cosmos--then he is a true artist in every sense of the word.  He has produced literature by accomplishing a sincere emotional catharsis."
--H. P. Lovecraft, Selected Letters IV, page 113

When I first became an obsessed H. P. Lovecraft freak, I was not much of a reader.  I was obsessed with horror films and certain that I wanted a career in horror cinema.  My relationship with Shakespeare was as a player in dramatic events, not a reader or a poet.  It was not until I came out as queer and began to read queer authors such as Wilde and Woolf that I began what is now my obsession with Literature.  Wilde was influential in a number of ways, not only as poet and writer of fairy stories and one supernatural novel, but as exhibitionist and camp stylist.  Writers such as Kafka and Maugham were, to the youthful me, artists absolutely, writers with vision.  I was affected with profound emotion when I first read Of Human Bondage in junior high school.  I cannot now what prompted me to begin my initial investigation of Henry James, but I am certain it had something to do with my learning of the hints regarding his ambiguous sexuality--probably finding a passage concerning it in some Wilde biography.  As with Wilde, my initial fascination with James came with ye reading of biographies, then a reading of his complete short stories in a series of volumes I found in library.

My obsession with Lovecraft dimmed a little when I got into the local punk scene and lived a frantic social life within the punk community.  I had given up my early attempt to write weird fiction because my early attempts were so awful--which didn't stop them from seeing print in small press journals.  It wasn't until 1985, when Jessica Salmonson invited me to collaborate on a story for the anthology Cutting Edge, that the idea of a serious return to writing bloomed within my mind.  This coincided with a new flourish of critical commentary on Lovecraft's fiction in book form, which also coincided with my new-found passion for literary criticism.  It was then that I became aware of Lovecraft as a literary artist, a man obsessed with the creation of excellent fiction.  I noticed, more and more, his use of the word "art" in his reflections on weird writing.

Thus I became interested in the idea of writing weird fiction that was not only eerie but poetic, beautifully expressed.  I felt a yen to become "the Oscar Wilde of Lovecraftian horror".  I am still extremely interested in writing weird fiction that is as near to art as I can make it.  I feel that this requires writing fiction that is not only excellent but deeply personal, and expression of one's soul and passion, of that which haunts one's mind.  If we can make our weird fiction perversely our own, we have gone far, I feel, in doing work that is original and vital.  But just as important is that we strive for excellence, we learn in any way we can how to write, even poor uneducated sods such as myself.  It's not enough to write a bunch of stories.  We need to strive toward being the very best writers we can be, so that we grow and excel at our craft, our art.  To this goal, I dedicate all my future years. 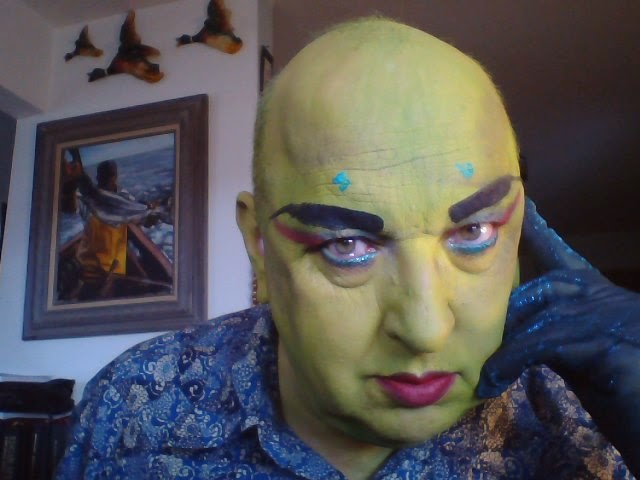